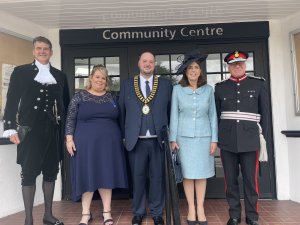 The afternoon started at the Council offices where all dignitaries had a meet and greet with Cllr Craig Wheeler and his Consort, Mrs Lauren Wheeler. It was lovely to welcome so many to the town.

At 2.45pm all dignitaries processed to St James' Church. The service started at 3pm, during which Cllr Craig Wheeler declared his Re-affirmation of Oath. The service consisted of some beautiful hymns, and Readings from the Lord-Lieutenant of Northamptonshire and former Mayor, Val Carter. It was a lovely service delivered by Reverend Nolan Robson. The collection for the Haemophilia Society raised a very generous £300.

All guests were invited to have refreshments after the service which was served at Thrapston Plaza Centre – it was a great opportunity for everyone to get together and mingle.