The Proclamation of King Charles III 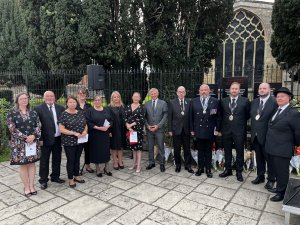 On Sunday 11th September 2022 at 6pm, the Mayor of Thrapston Cllr Craig Wheeler, Thrapston Town Councillors, North Northants Unitary Councillors, the Royal British Legion and Thrapston residents came together in Coronation Gardens to hear the Proclamation of the Accession of His Majesty King Charles III.

All assembled gave three cheers for His Majesty the King and sang the National Anthem.

Revd Nolan Robson, the Rector of Thrapston, closed the ceremony with prayers and a hymn.

The Mayor concluded proceedings by thanking everyone who attended.

The Book of Condolence for Her Majesty The Queen remains open this week in the Town Council office (77 High Street).